What an amazing and FUN live event this was! Than

DAMN DANIELA! Now I want one of these â machines

via @tvline - Matt's Inside Line: Scoop onÂ the re

Thanks to Bea for the video!

Thursday on âThe Talkâ Eric Christian Olsen and Daniela Ruah dish on the upcoming âNCIS: Los Angelesâ episode directed by Ruah. Christian reveals, âEverything is going on in this episode. Callen [Chris O’Donnell] is accused of being a double agent. There’s a big reveal at the end that I can’t reveal now…there’s a fashion show. I think I’m shirtless through half of it. I mean, it’s everything that everybody wanted.” 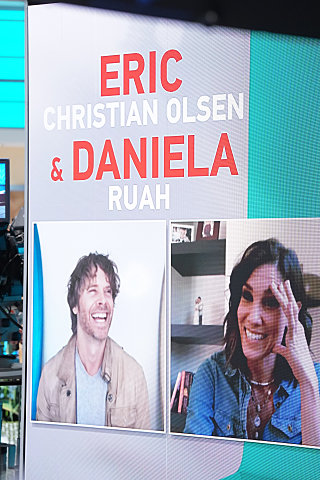 On her directorial debut, Ruah shares, “It is a huge amount of responsibility, but the best thing about it is that I have a team of incredibly talented department heads and everyone else that works below them, that make the dream that is this show come true. And, so the main thing I learned basically was to delegate, and not micromanage everything, because they know exactly what they are doing. So all I have to do is convey an idea of what I’d like it to look like and feel like, and they just get it done.â She adds, âBeing an actor on this show for so long, I mean, where else would I ever have this experience be my first, it has to be here. And so now I feel like I’ve learned a little bit, there’s a lot still that I need to learn, but you know, hopefully this becomes a parallel career for me.â