Today is the last day of filming episode 11 with @

In this new interview with portuguese news outlet

Paulette Cohn from PARADE magazine has yet again managed to bring us another wonderful interview with Daniela Ruah, this time about the most awaited event of the season: the #Densi wedding.

We also get a new batch of promotional stills, in anticipation of the episode.
Check all the new photos at the gallery link, below ð

Itâs been nine years in the making, but finally Special Agent Kensi Blye (Daniela Ruah) and L.A.P.D. Liaison Marty Deeks (Eric Christian Olsen) are going to walk down the aisle on this coming Sundayâs âTill Death Do Us Partâ episode of NCIS: Los Angeles.

âI didnât think it would ever happen,â Ruah tells Parade.com in this exclusive interview. âI mean, heck, I didnât think they would get together at all. Itâs one of those things where you start the show, and we donât know how long the showâs going to go, and, obviously, the longer the show goes in terms of seasons, the more youâre going to have to develop a relationship.â

And develop a relationship they did, despite Kensiâs history with men â they either die or leave her â and the resulting baggage she brought into the relationship. 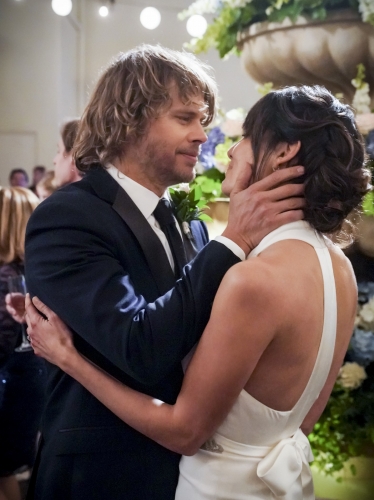 âThen this guy shows up and heâs funny and heâs, obviously, very smart,â Ruah says. âItâs also about what he needed out of this relationship, itâs not only about Kensi. I feel the best thing about these two characters is that they give each other the freedom to deal with whatever they need to deal with on their own and when they canât do that anymore, theyâre there to help each other. Theyâre an incredible support system, and above all, they listen to each other.â

Of course, in typical NCIS: LA fashion, the wedding doesnât go off without a hitch. Anatoli Kirkin (Ravil Isyanov) pays Deeks a surprise visit on his wedding day and he isnât alone. So, even though it is a joyful occasion, it isnât without the requisite action and crime solving. And Ruah takes a little bit of the credit for how the episode plays out.

âOur show runner Scott Gemmill is quite wonderful at saying, âIs there anything that you guys want to try this season? What havenât you done that you would like to do?,â and I just remember saying, âYou know what? During the wedding episode, I want to fight in my dress.â So, sure enough, he gives me that opportunity, which Iâm really pleased about.â

But in order for that to happen, the wedding dress had to have certain qualities. It couldnât be strapless because that could lead to a serious wardrobe malfunction and it had to be affordable because there had to be multiples of the dress, especially because it goes from maxi to mini.

âObviously, the wardrobe department did all the legwork when it came to tracking down the dress and having it fit perfectly for me, but I found the dress,â Ruah says. âI found the image of the dress and I said, âIf you guys can get hold of this, it doesnât seem too expensive,â because for some reason I do care about that part of it like I was buying it for myself.â

For more scoop on the wedding â and the latest news on Linda Hunt â check out the rest of the conversation with Ruah HERE.