Some shoulder action from @danielaruah during this 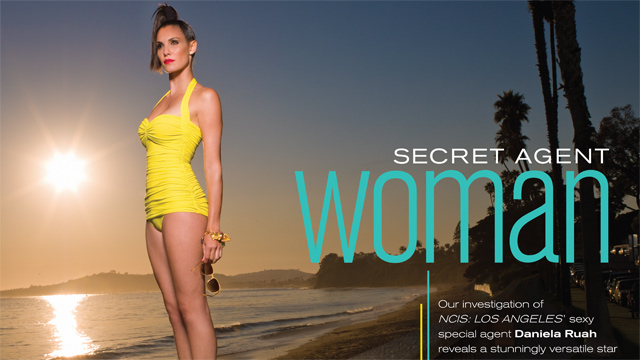 The key to cracking the case of Daniela Ruah, who stars as Special Agent Kensi Blye on NCIS: LOS ANGELES, lies in her trailer on Hollywoodâs storied Paramount lot.

Thatâs where the actress keeps two treasured, yet disparate possessions: a rally scarf for a beloved Portuguese soccer team and a girly-pink bottle which, appropriately enough for the statuesque stunner, contains a fragrance called Bombshell. âI never walk out of my trailer without putting on perfume,â she says.

Ruah is, as the contents of her trailer suggest, a heady blend of sports-loving tomboy and alluring girl next door. No wonder sheâs so adept at playing the hit crime dramaâs not-so-secret weapon, a woman who can handily kick bad-guy ass, then turn around and dial up the sex appeal for an undercover op. âKensiâs not too far off from who I am,â the actress admits during a break from filming. âThe longer I play her, the more we jell into each other.â

Like her character, Ruah prefers to be at the center of the action. Sheâs been known to plead with the stunt coordinator to let her do as many of her own stunts as possible and, after deciding to get a motorcycle license, even bought her own bike. Too bad a producer, concerned about his actressâ safety, quickly put the kibosh on that little hobby.

âHe pulled me aside and, literally finger in my face, said, âDani, motorcycleâno,â â she remembers with a laugh. âI said, âBut Kensi rides, and itâd be so great if I could!â Unfortunately, it was too much of a risk.â

The actress has never shied away from taking chances. Born in Boston but raised mostly in her parentsâ native Portugal, she decided early on that, despite coming from a family of doctors, she wanted to perform. Looking back, the 28-year-old recalls always standing out in a crowdâacting in school plays, studying ballet, modern and contemporary dance, and making the occasional tonsorial mistake. âI chopped off all my hair,â Ruah recalls. âI have very curly hair, and it curled up into a mini-Afro. Then I made the mistake of dyeing it orange, so my friends called me âSideshow Bob.â â

She got serious about her acting ambitions when, at age 15, she caught a TV commercial advertising an open-call audition for a new Portuguese soap opera. Accompanied by both of her grandmothers, Ruah stood in line along with 3,500 other hopefuls and ultimately walked away with a starring role.

âFrom then on, it was just like a snowball,â says the actress, who over the next several years starred in three other soaps while earning a degree in performing arts. âA lot of people joke about soap operas, but thereâs no better training. In no [other] job will you have as many lines to learn, in as short an amount of time, with as complicated a plot. It was the biggest lesson of my life.â

INSPIRED BY HER LOVE OF DANCE, Ruah competed onâand won!âthe first season of DanÃ§a Comigo, Portugalâs version of Dancing with the Stars. âAt the time, you get all these compliments,â she says, âand now I watch it on YouTube and Iâm like, âThatâs the biggest load of bleep Iâve ever seen myself do!â But as much as I laugh at myself, itâs still a great memory.â

So, too, is her first trip to Los Angeles, which happened to be for her NCIS: LOS ANGELES callback. âThey told me that day, âYouâve gotten the part,â â says the actress, whose striking gaze is courtesy of a birthmark that covers most of the iris in her right eye. âI called my mom in Portugalâit was like 3 in the morning there, but sheâd said, âAny news, you call me. I donât care what time it is!â â

In the three years since, Ruah has taken the success thatâs come with her Hollywood break in stride. She does, however, cop to having felt a tad star-struck when she first met Star Wars legend George Lucas, who executive produced Red Tails, the film she appeared in this January. âHe shook my hand and said, âHi, Iâm George,â and in my mind, Iâm going, âUh, yeah, I know!ââ

If all goes according to plan, the ambitious actressâ who, in addition to fluent English and Portuguese, speaks conversational Spanish and Frenchâwill continue to balance a TV gig she loves with a flourishing movie career.

âThe goal is to work as much as possible in projects I respect and that will help me grow,â she says before being called back to set. âNo actor has a flawless career, but in the long term, Iâd like my name to be synonymous with good quality.â

Daniela Ruah was the star of the new campaign for the portuguese water brand “Ãgua das Pedras” this summer, totally filmed in Cape Town, South Africa.

Take a look at the tv spots (including the directorÂ´s cut) and an exclusive interview with Daniela.
You can also check all the official & behind the scenes photos at the gallery. 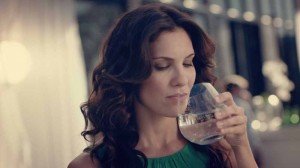 Fans of the CBS series NCIS: Los Angeles and Hawaii Five-0 will get a special treat when the network pulls off a crossover appearance by junior field agent, Kensi Blye.

A CBS spokesperson confirms to the The Hollywood Reporter that Daniela Ruahâs character will appear on Hawaii Five-0âs beaches sometime in the fall, as first reported by TVGuide.com. The actress actually broke the news herself on Twitter.

“Aloha,” she tweets. “Read my lips closely … Kensi will make her way to Hawaii Five-0 this season! Stay tuned … If they need me in Hawaii, I will make the effort and fly over there for the sake of solving crime.”

Sheâll apparently escape from the concrete jungle for only one episode.

Surf’s up for NCIS: Los Angeles’ Kensi Blye: She is heading to Oahu this fall as part of a NCIS: LA-Hawaii Five-0 crossover, a CBS rep confirms to TVGuide.com.

Further details were not immediately available, though these kinds of stunts are usually planned for November sweeps. Daniela Ruah, who plays Kensi, first revealed the news on Twitter.

“Aloha,” she tweeted. “Read my lips closely … Kensi will make her way to Hawaii Five-0 this season! Stay tuned … If they need me in Hawaii, I will make the effort and fly over there for the sake of solving crime.”

To calm upset fans, Ruah later tweeted that Kensi’s trip was part of a one-time crossover, though who could blame her for wanting to stay in Hawaii?