The amazing Meghan from our affiliate NCIS LA Source has released some new stills for the 4×15 “History” episode, to be aired next tuesday, February 19th. Enjoy the new photos! ð

AN INVESTIGATION LEADS THE NCIS: LA TEAM ON THE TRAIL OF A FORMER TERRORIST GROUP AND SENDS KENSI AND DEEKS INTO THE WOODS ON âNCIS: LOS ANGELES,â TUESDAY, FEB. 19
CHEAT TWEET: Is a former terrorist group resurfacing? R Deeks & Kensi on their trail? Watch #NCISLA 2/19 9 pm ET/PT âHistoryâ â An NCIS: LA investigation leads the team to question a lone survivor of a former terrorist organization, while Kensi and Deeks follow the trail into the woods, on NCIS: LOS ANGELES, Tuesday, Feb. 19 (9:00-10:00 PM, ET/PT) on the CBS Television Network.

NCIS: Los Angeles’ March 5 episode, ‘Wanted’, directed by Chris O’Donnell (who plays Callen), will explore the personal life of LL Cool J’s Sam Hanna, whose wife, Michelle (Aunjanue Ellis), is back for the first time since November and again goes undercover as her CIA alias, Quinn.

“There are some really strange things that happen that people won’t expect,” LL says. “She comes back in a very odd way, and her story is a lot grayer than people first thought.”

During the four seasons of the CBS drama âNCIS Los Angelesâ, fans from around the world â also known as NCISLAfamilia â got to know each other on Twitter, Facebook & various other social media sites.

After the success of the first NCISLAfamilia meet up in London in May 2012, our partner NCIS LA Magazine website thought it would be great to get together more fans which is why we are happy to announce that they are planning a NCISLAfamilia Meet Up on October 11/12, 2013, and this time in the City of Angels â Los Angeles! 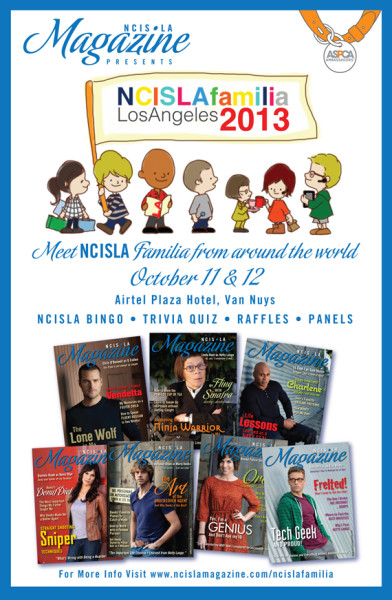 This should be soooo exciting for the fans who get to go! I wish I could go too, but unfortunately IÂ´m too broke LOL…

So what are you waiting for?
Check the NCISLAFamilia Page for more details and info how to register!! ð

Last night, Daniela Ruah attended the Hennessy Toasts Achievements in Music Pre-Grammy dinner event with Grammy Host LL Cool J and Mark Burnett, held at The Bazaar at the SLS Hotel Beverly Hills in Los Angeles, California. Besides her, another portuguese actor (and soon to be *very* famous, mark my words) attended the event, our own Diogo Morgado! I am so proud of these two! IÂ´m sure you can tell ð Stay tuned for more photos from the event soon. HereÂ´s a photo of Daniela RuahÂ´s class in St. Julians high school, back in 1999. Big thanks to @Ines__W for the photo! ð SAM TAKES ON A PERSONAL MISSION TO HELP HIS FRIEND, AN AFGHANI ELDER, SEARCH FOR HIS MISSING NEPHEW, ON âNCIS: LOS ANGELES,â TUESDAY, FEB. 26

CHEAT TWEET: Sam strives to return the favor for a friend who protected him at all costs #NCISLA 2/26 9 pm ET/PT http://bit.ly/WEdNtO

âLokhayâ â Callen is concerned that Sam might be too invested after he takes on a missing persons case for an Afghani elder who helped him years ago when he was wounded on a mission, on NCIS: LOS ANGELES, Tuesday, Feb. 26 (9:00-10:00 PM, ET/PT) on the CBS Television Network.