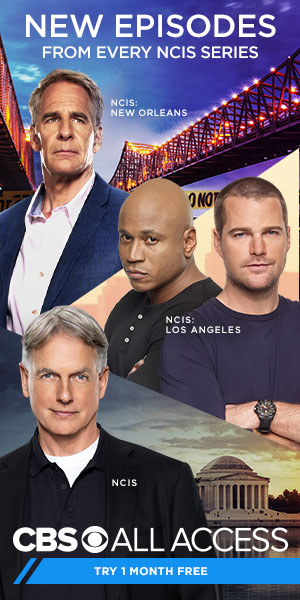 NCIS: LOS ANGELES
(2009/2020 â¢ DRAMA / ACTION)
Daniela as Kensi Marie Blye
Status: Airing Season 11
Sundays 9/8c, only on CBS
Summary:
NCIS: Los Angeles is a drama about the high-stakes world of a division of NCIS that is charged with apprehending dangerous and elusive criminals, who pose a threat to the nationâs security.
More Information | IMDB | Official | Photos Making a short interruption on our hiatus to mark

*LINK IN BIO* Site Going On A Hiatus / Site Pausa

They're sisters, not mother and daughter ð HAP

CBS TV Studios and KCTV5 News recently released two behind the scenes featurettes for the NCIS: LA season 10 finale, airing tonight at 10/9c, only on CBS. Check both videos below:

And now we have the full press release. CALLEN AND SAM WORK WITH NAVY CAPTAIN HARMON RABB, JR. TO LOCATE A GROUP OF ISIS SYMPATHIZERS ON THE USS ALLEGIANCE, WHILE HETTY ENLISTS NAVY LIEUTENANT COLONEL SARAH MACKENZIE TO HELP OBTAIN INFORMATION FROM A RUSSIAN DIPLOMAT, ON THE 10TH SEASON FINALE OF âNCIS: LOS ANGELES,â SUNDAY, […]

Yay! Harm is back, as well as Talia! ð CALLEN AND SAM TRAVEL TO THE USS “ALLEGIANCE” IN THE PERSIAN GULF TO WORK WITH NAVY CAPTAIN HARMON RABB, JR. WHEN THE NCIS TEAM UNCOVERS ISIS SYMPATHIZERS WHO ARE TARGETING MILITARY LOCATIONS, ON âNCIS: LOS ANGELES,â SUNDAY, MAY 12 Special Guest Stars Include: David James Elliott […]

Last saturday night, the cast and crew of “NCIS: Los Angeles” got together at Highland Park Bowl, in Los Angeles, to celebrate the end of yet again another successful year of CBSÂ´s hit show. Check all the photos at the gallery link below and also a small sneak peek at the party and the S10 […]

The wait is finally over! CBS has announced today that âNCIS: Los Angelesâ has been officially renewed for Season 11! ð Congrats to the cast and crew for another successful year and to the fans, who keep making the show possible. HereÂ´s to another amazing season! ð¥ HereÂ´s the official press release: CBS announced today […]